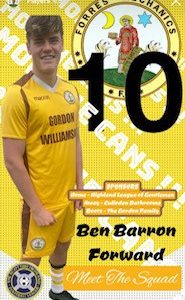 Funniest moment(s) on the pitch: Skins shot 55 yards out Vs Huntly FC

Best advice given to me: Play between the sticks and the box will become my dance floor.

Which person would you most like to meet and why?: Leonardo DiCaprio, because he is a great motivational speaker and sure he would be a good laugh.