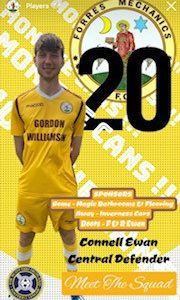 Favourite goal(s): First goal for the Cans, 5/0 away to Nairn County FC

Funniest moment(s) on the pitch: An own goal that went through goalie’s legs after back pass aged 11

Dream stadium to play at: Hampden

Best advice given to me: Play like it’s the last time you can

Which person would you most like to meet and why?: David Attenborough