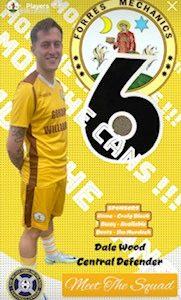 Most memorable match(es): I’d say beating Keith FC 2-0 for Rothes FC, I scored both the goals and my uncle and auntie used to be in the Keith FC committee for years and took me too a lot of there games when I was younger

Favourite goal(s): against Nairn FC for Rothes FC or for Dufftown FC against Sunnybank FC in the Super League Playoff to keep them up in my final game.

Most prized football possessions: Won 3 POTY awards at Rothes FC in my 1st Highland League season so was good feeling, but hopefully can add team silverware too that sometime.

Favourite music to listen to pre-match: Mixture of anything really

My dream five-a-side team: The Fine Committee – Roj, Myself, Groaty, Cazzy and Lee….not many beating that I’m afraid!

Best advice given to me: Just be yourself

Favourite music artist(s): Oasis, Calvin Harris and just a bit of everything really ?

Which person would you most like to meet and why? Lionel Messi, he’s the Goat simple as that