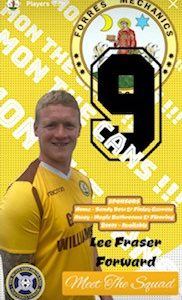 Most memorable match(es): Inverurie Locos FC away, first goal after coming back from 21 months out injured.

Favourite goal(s): Inverurie Locos FC away (same as above) another one that sticks in mind is away to Turriff United FC one year, turned and hit the ball from 30 yards out and went straight into the top corner.

Funniest moment(s) on the pitch: Cup game away to Halkirk FC, game got videoed and my shorts got pulled down in a tackle so my bare arse was caught on camera ?

Dream stadium to play at: Already played at Ibrox at youth level but a fully packed Ibrox would be the dream

Best advice given to me: Give 100% all the time and never give up

Favourite music artist(s): like a mixture of music, so hard to pick a favourite.

Which person would you most like to meet and why?: Cristiano Ronaldo, because he’s one of my favourite footballers.