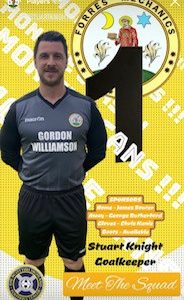 Favourite goal(s): Vs Lossie FC in the Scottish Cup

Funniest moment(s) on the pitch: Don’t think I laugh much in games!

Most prized football possession(s): League medal or any new pair of gloves

Favourite music to listen to pre-match: nothing that Brady plays!

Best advice given to me: ‘this too shall pass’

Which person would you most like to meet and why? Sir Alex Ferguson, it would be fascinating to discuss his man management and techniques for motivation.