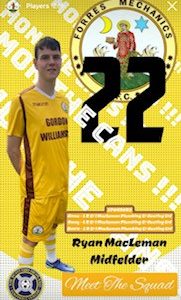 Most memorable match(es):
Debut for Ross County FC vs Montrose FC
Debut for Forres in 4-0 win vs Strathspey Thistle FC

Funniest moment(s) on the pitch: my teammate after kickoff went to kick the ball long but smashed it in the refs balls then went to kick long again and did the same thing.

Most prized football possession(s): Ross County away top with name and number

Best advice given to me: Don’t care what other people think everything is opinions.

Which person would you most like to meet and why?: Messi and have a football session with him.