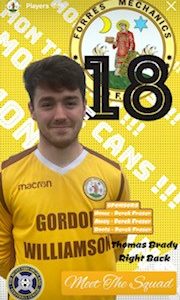 Most memorable match(es): Bonnyrigg in the Scottish Cup , playing at Tannadice against Dundee United FC U18’s

Favourite goal(s): Header against Huntly FC as it was my first goal for Forres

Most prized football possession(s): Top goal scorer trophy I got in a tournament away with Ross County FC

Dream stadium to play at: Anfield

Best advice given to me: Open your eyes when heading the ball

Which person would you most like to meet and why?: Ronaldo, because he’s my favourite player