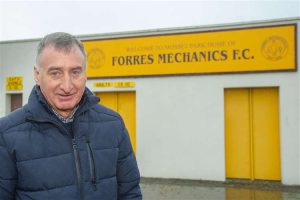 He had been previously been club secretary at Mosset Park since 2001 and vice-chairman to Dr James Anderson for around five years before the Doc resigned in 2019.

Dave said: “It has been a great privilege to serve this great club for 21 years as secretary, vice chairman and chairman”.

As well as a long association with Mechanics, the former Moray Council employee has been about football for almost 40 years.

In 1984, he started a 16-year journey with the Moray and Banff Referee’s Association and was then assistant secretary to ex-Highland League secretary John Grant for a season.

It was Bruce Hay, Forres chairman in 2001, who asked him to move to Mosset Park – where he has remained since.

Dave has been a fantastic servant to Forres Mechanics FC and the Board would like to go on record by thanking him for the professionalism, commitment and dedication shown during his time with the club. We wish him all the best in his retirement although we hope he will still be involved with the club in some capacity.

Following on from this the Board are delighted to announce that Cans director David “Tosh” MacKintosh has agreed to take on the role as chairman with immediate effect – Tosh has a long association with the club including spells as a player, manager and chairman.